Off To the Emergency Room

So, my return from the paradise of California has brought me challenges.On the HF side I knew I had a problem before I ever left and, as you know, I traced that back to a feedline that was either hacked by a lawnmower or a weed eater. I picked up the necessary connectors to put that back together again and will work on that this evening.

But, on the VHF / UHF side I thought everything was "just peachy" as the saying goes. So Monday, I jumped in the car to make the trek to work and catch up with my favorite amateurs on the local repeater. We were getting a little rag chewing in and as I sat back and listened it happened. 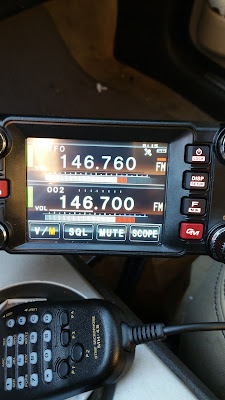 I know you can't hear through a picture! But, I was sitting right inside the car and the audio came to a tragic end. As I looked down I still saw that the scale was indicating that both were receiving signal I just could not hear anything. I shut the radio off and powered back up. No luck. I made it to work and went inside. Twice before lunch I cycled the power again hoping to get audio again. When I went to lunch I got the idea to throw some earbuds at it. It was working! Positive step, right?

Wrong. Pull the earbuds out and no audio. I shut the radio off again and fired it back up. Radio had audio but it sounded like a twenty year old speaker cone rattling like the paper was deteriorating. And, it only lasted about twenty seconds. I have not been able to get any audio out since other than by wearing earbuds. So, the FTM-400XDR will be boxed up and sent to the ER at Yaesu Community Hospital in Cypress, CA.

The only thing that sucks is that I was only fifteen minutes or so from there during my stay in Cali. Just my luck.