Perhaps my most rewarding experience in amateur radio so far occurred the first weekend in June of this year. The annual Museum Ships on the Air event took place June 3rd and 4th and a few friends and I decided to accept an invitation to operate from the mock station located inside the Indiana War Memorial.

As some of you may know, the USS Indianapolis was hit by a Japanese torpedo at 0014 on 30 July 1945. At 0026 the ship was fully submerged and on the way to the bottom of the Phillipine sea. The ship's crew, 1,196 men either went down with the ship or were left floating in shark infested water. It is estimated that 900+ were floating in the water, hoping for rescue. Because this was a top secret mission with no escort the ship was not missed and the men were not discovered for four days, and then by accident. When discovered, the survivors of the shark infested water numbered 316. This top secret mission, which cost an extraordinary amount in human life, let alone the cost of the ship, was to deliver key components of the atomic bomb that would be dropped on Hiroshima one week later. The USS Indianapolis accomplished her mission.

So, it was with great honor to operate as WW2IND for the Ships on the Air event. I spent about 3 hours on the air running SSB making 71 contacts from all over the US. My vantage point was behind this fine rig, the Icom IC-756 Pro III and we pushed the 40m signal out through a dipole mounted at 110 feet. Power was supplied with an Ameritron AL-80B pushing 450 watts. 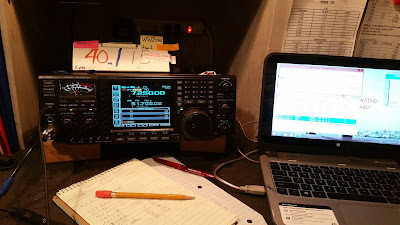 The other amateurs that operated split the time on CW working 20m. Both of these guys are extremely proficient CW operators and you may remember them from my post about the very low power WAS contest they decided to have. You can get an update on their progress by clicking on their blogs to the right. On the left is Brian, KB9BVN, and on the right at the controls is Ivin, W9ILF. Both of these guys are great elmers and really love for people to learn morse code. 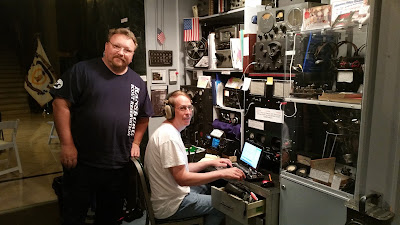 I decided to write this post for two reasons. One, the USS Indianapolis wreckage was discovered this week after 72 years. And, two, to bring this yearly event to your attention and encourage you to get involved next year and volunteer to operate. I want to leave you with a couple of pictures inside the mock radio room. I decided to watch the movie, "USS Indianapolis" last night and I was shocked to see that it looked so close to the actual. If you get a chance, check the movie out and definitely watch for the next Museum Ships on the Air event. 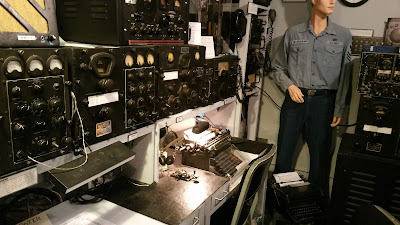 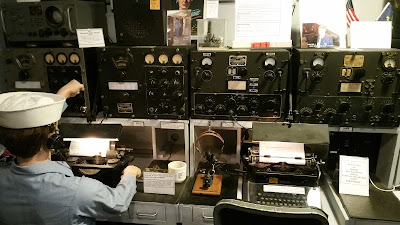